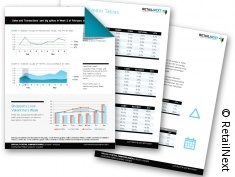 RetailNext has released its monthly Retail Performance Pulse, showing a 7.3 percent year-over-year decrease in sales on a 9.9 percent decline in traffic at physical stores for the retail month of August.

"It's not a surprise to see a decline in both sales and traffic as it not only continues the well-established trend retailers have seen this year, but it also reflects the changing nature of shoppers and their new shopping journeys," said Shelley E. Kohan, vice president of retail consulting at RetailNext. "Retailers are, however, seeing a more committed shopper when she enters the store, and one who is more compelled to purchase once there. Shoppers are buying at a higher rate, measured by increases in both Conversion and Average Transaction Value (ATV)."

"As a season, Back-to-School did not provide the lift like it had in past years," added Kohan. "Much like Thanksgiving, today's shoppers are reinventing the Back-to-School season, expanding the season both forward and backwards as they seek greater value. Other contributing factors to August's performance were a late Labor Day weekend and a dip in disposable income for apparel and other segments due to the tremendous month experienced by automobile sales."

The first two weeks of August were the best performing weeks, driven in part by psychological appeal to customers of sales tax-free holidays and corresponding rises in store traffic and conversion. The last week of the month was the worse performing week.

"While August was a tough month for many stores," added Kohan, "indicators suggest lots of opportunities for Holiday as employment, income and interest rates remain positive. It will be important for retailers to maximize this Holiday season, as Holiday 2016 will be challenging, especially with distractions around the Presidential election."

The complete Retail Performance Pulse can be downloaded at www.retailnext.net.