Largest non-food discount retailer in Europe and ‘Retailer of the Year Europe 2014-2015’ is opening its 500th store. 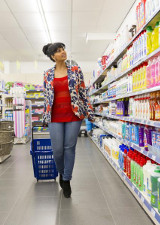 Action is committed to further international expansion and is planning to speed up the opening of new stores in 2015.

Action, the largest non-food discount retailer in Europe and ‘Retailer of the Year Europe 2014-2015’, is opening its 500th store. The 500th Action store is located in Kortrijk, Belgium.

This is just one of 11 new stores that the store chain will be opening this week: the largest number of stores ever opened in a single week in the history of Action. The new stores are all in countries where Action is already located, namely the Netherlands, Belgium, Germany and France.

Ronald van der Mark, CEO of Action: “We are delighted that the increase in number of stores allows us to welcome so many new customers and colleagues. The fact that we are able to open so many new stores during our busiest period of the year shows the strength of our organisation. Besides boosting the local economy and creating jobs, the growing number of stores also means that we can introduce more and more customers to our surprising products range and impressively low prices. Customers are clearly happy with Action and recently expressed their appreciation by voting us ‘Retailer of the Year Europe’. ‘At the beginning of 2015 we plan to celebrate the fact that Action now has more than 500 stores on together with our customers. We will have dazzling offers in January and February.’