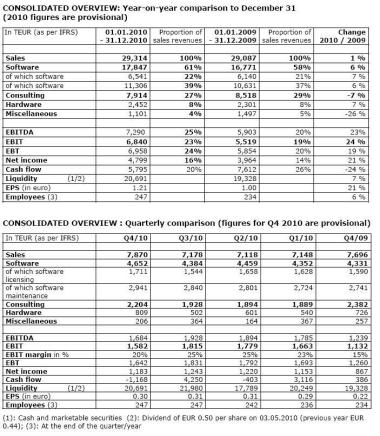 for the fifth year in succession ATOSS Software AG has achieved record results. Provisional figures show that the specialist in workforce management recorded a further slight increase in sales in 2010, bringing the total to EUR 29.3 million (previous year: EUR 29.1 million). Turnover in the company’s core software business rose by 6% to EUR 17.8 million (previous year: EUR 16.8 million), ahead of the market trend.
Operating profits (EBIT) were around 24% higher at EUR 6.8 million (previous year: EUR 5.5 million), lifting the return on sales on an EBIT basis to 23%, compared with last year’s 19%. With this level of profitability ATOSS has set new records in the history of the company. Not only was the increased forecast announced on October 12, 2010 for EBIT of well over EUR 6 million clearly justified, the results also exceeded market expectations.
The highly positive development in business over the past five years shows that the ATOSS Software AG business model is firmly anchored in the growth market for workforce management. The company’s sustained success derives from its consistent implementation of a strategy that focuses on enhancing customer benefits. In order to maximize these benefits, ATOSS invests substantially in the technology and capabilities of its products and continues to develop its organization with a dedicated sector-specific focus.

ATOSS continues to report strong cash flow, liquidity and equity figures. The company generated cash flow from operations of EUR 5.8 million (previous year: EUR 7.6 million), equivalent to 20% of sales. As in past years this was once again a strong performance, with the 2010 reporting period being notable for a steep reduction in receivables. Liquidity rose by 7% EUR 19.3 million to EUR 20.7 million, equivalent to EUR 5.22 per share compared with EUR 4.88 last year. On the balance sheet closing date the equity ratio stood at 63% (previous year 57%).

ATOSS outstrips comparative index in its stock market listing anniversary year, no decision yet on dividend
In the past four years in particular, the price of ATOSS stock, which made its stock market debut in March 2000, has developed strongly. Once again in 2010 ATOSS put the benchmarks in the shade with a performance (plus 38%) which, for example, clearly exceeded the comparative DaxSubsector Software Performance Index (plus 19%).
In addition to these price gains, the company is also notable for its dividend payments. ATOSS pursues a dividend policy that is based on dependability and reliability. Since 2003 the company has made a point of sharing its earnings per share in equal measure with its shareholders. It is expected that the Management and Supervisory Boards will decide upon the dividend to be proposed to the annual general meeting to be held in Munich on May 3, 2011 when the Supervisory Board meets to discuss the annual accounts on February 22. Last year on May 3, 2010, ATOSS paid a dividend of EUR 0.50 per share, compared with EUR 0.44 in the year before.

ATOSS is a specialist in a growth market
In the battle for market share, tangible means of increasing productivity are a high priority for companies competing in our globalized economy. In the past successes have been achieved in purchasing and production with new approaches to supply chain management (SCM) and enterprise resource planning (ERP). Now decision-makers are increasingly focusing their attention on ways to more appropriately deploy their workforce to meet demand situations. This area holds considerable potential that can be tapped at a comparatively modest investment cost which pays for itself in a very short time. Workforce management is acquiring an unstoppable momentum which serves to underpin forecasts for market development. IDC Worldwide expects the market for workforce management in 2011 to grow by 8.5% to some 1.52 billion US dollars.

ATOSS plans to continue its success with quality earnings
Following on from the highly positive business recorded in Q4 2010, in a conservative outlook the Board of Management expects to see stable to moderately increasing sales. Accordingly for the sixth year in succession ATOSS should remain on course for a record performance. However the focus of measures planned for 2011 is not so much on developing sales as on selectively broadening the company’s business model and exploiting the prospects for growth in additional sectors and regions. The company therefore plans to increase its research and development expenditure and make further investments. Despite this conscious commitment to the future development in business at ATOSS, the management conservatively estimates that the margin on sales on an EBIT basis in 2011 will be around 20%.