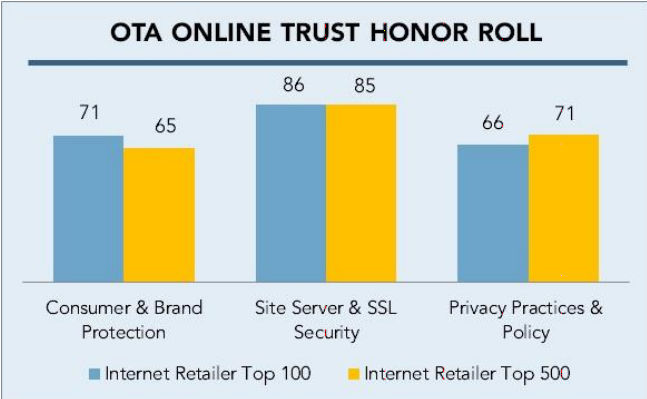 Average sector scores, out of 100 base points © OTA

Now in its seventh year, the OTA Audit and Honor Roll is the foremost authority for identifying organizations considered most trustworthy based on their online security, privacy and consumer protection practices.

OTA completed a comprehensive assessment of the 500 largest online retailers, evaluating over three-dozen data attributes and criteria. Based on the composite weighted analysis, 2015’s top 10 most trustworthy online retailers (technically 11 due to a scoring tie) are:

"At Netflix, maintaining the trust of our 62 million global members is paramount. Critical to our success is our commitment to protecting the privacy and security of consumer personal data. We applaud the Online Trust Alliance’s efforts in advancing best practices to enhance online trust, and are honored to have been named to the Online Trust Honor Roll for the fourth year in a row," said Lara Kehoe Hoffman, Global Director, Data Privacy and Security, Netflix.

For the third consecutive year, American Greetings earned the honor of most trustworthy retailer. American Greetings and Netflix are the only two holdovers from last year’s top 10, while five of the top 10 had never qualified for OTA’s Honor Roll until this year.

In total, 212 of the 500 largest online retailers, or 42 percent, qualified for OTA’s Honor Roll. Despite setting the most difficult standards yet for its annual trust audit, OTA reported a 78 percent improvement over 2014, when only 24 percent of evaluated online retailers made the Honor Roll. This dramatic improvement is due to nearly 100 retailers, who fell just short of the threshold last year, making straightforward improvements to push them over the top.

“The online threat landscape is constantly evolving and our latest audit reflects that. Even companies with top scores on the Honor Roll last year would have failed this year had they not adopted the latest best practices,” said OTA Executive Director and President Craig Spiezle. “These practices are achievable for retailers of any size. We commend those retailers who took the necessary steps to ensure responsible data stewardship.”

Unfortunately, 45 percent of the 500 evaluated retailers not only didn’t qualify for the Honor Roll, but outright failed at least one component of the audit. A failure typically means the retailer is especially vulnerable to an existing online security threat, is not adequately protecting consumers from phishing and other social engineering threats, or has insufficient privacy policies and inadequate disclosures.

The goals of the audit are to promote and accelerate the adoption of consumer protection best practices, promote data stewardship, encourage meaningful industry self-regulation, and recognize leadership in these endeavors.

OTA’s retail report is one segment of its cross-industry 2015 OTA Audit and Honor Roll report which assesses nearly 1,000 websites including leading banks, U.S. government agencies, media outlets and social media/gaming companies. New for 2015, OTA has evaluated the security and privacy of an Internet of Things category focusing on connected home and wearable devices. The complete Honor Roll will be available on June 16.