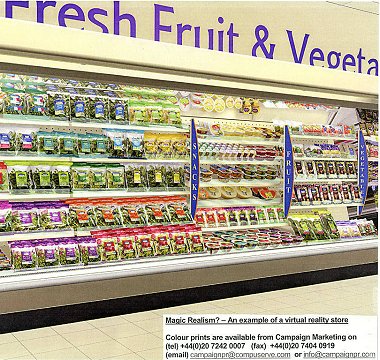 ID Magasin, the international behavioural research and design consultancy,
is introducing Virtual Reality research at Euroshop 2002. The new service
utilises the VisionStation®, a compact and portable display system that
provides a totally convincing replication of a fully stocked retail store.

Originally designed to train military pilots and tank crews, the system has
been adapted for commercial application by ID Magasin's trading partner,
the fifth dimension, specialist in interactive media for the retail trade.

The technology now makes it possible to test design concepts for stores,
NPD, PoP material and promotions without incurring the cost and
inconvenience of producing mock-ups. It also enables design changes and
iterations to be incorporated and tested without delay, significantly
reducing the time from initial brief to implementation.

A respondent sits in front of a concave hemispherical display system to
'tour' the store, navigating by means of a trolley bar or joystick. The
configuration of the dish encompasses peripheral vision, increasing the
realism of the experience. An Eyemark Recorder is used to establish the
visual cues used in the selection process.

ID Magasin Managing Director, Siemon Scamell-Katz, said, 'We brought a new
dimension to retail design with our use of scientific research and then the
introduction of the Eyemark Recorder. Combining this with Virtual Reality
is another step change. It brings objectivity to the measurement of design
effectiveness, reduces costs significantly and greatly speeds up the
development process. It's an important new marketing weapon for
manufacturers and retailers - and another nail in the coffin of subjective
design.'

A video film of the VisionStation® in use can be seen on the ID Magasin
stand J42, Hall 5.