The technology in the background makes for great trade fair presentations 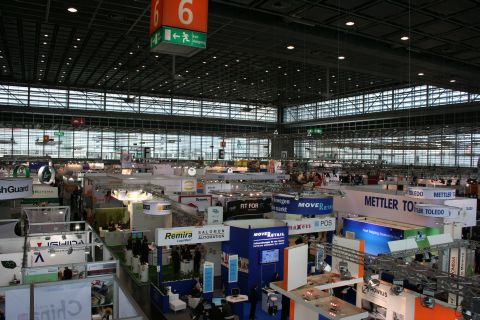 Emails and mail, telephone calls and video conferences cannot replace a one-on-one conversation. Trade fairs are still important dates in the industry calendar each year. Aside from trade fair presentations, companies also plan their own events – from an in-house exhibition all the way to events to motivate the staff. Modern event technology assists in reaching self-imposed communication goals.

In 2010, German companies invested approximately 14.9 billion Euros in trade show participation and events of all kinds. This makes up one-fifth of the total and thus the largest entry of the entire advertising outlay. The study titled “Dialogue marketing Germany 2011“ (“Dialogmarketing Deutschland 2011”) by the German Federal Post Office arrived at this conclusion. At number two and three are expenditures for ads at 13.4 billion Euros and direct mail marketing at 9.4 billion Euros.
Altogether the advertising market in 2010 once again dropped around one percent to 76.2 billion Euros. Two-thirds of the big companies made use of trade fairs and events, but only 16 percent of microenterprises.

According to an assessment by AUMA, these results confirm the analyses of the large industry sectors on the significance of individual marketing tools. And so companies in mechanical engineering and those in the electrical industry each invested over 40 percent of their marketing budget in tradeshow participations.

According to AUMA, once again this illustrates that tradeshow participations follow the development in the overall economy with a time delay since they require a relatively long preparation time and trade fairs take place in fixed intervals. The clear increase in exhibitors in the first half-year of 2011 compared to the previous year shows that trade fairs by now are once again used in a similar strong fashion as they were prior to the economic crises. The development of platforms in the first half-year remained constant compared to previous events; in 2010 there had still been a drop of 3 percent.

In our interview on this focal topic, Mossadegh Hamid also attests to increasing demand. The director of the trade show agency DIMAH cautions against using event technology just for the sake of using it and thus echoes Elfie Adler, Managing Director of FAMAB e.V., the Association of Direct Business Communication which the exhibition booth builders are also members of. In December Elfie Adler said in a Euroshop interview: “An exhibition booth is a company’s stage and temporary home. It is not about whether edges are now considered to be round or black supposedly being the new white.“ In the past, novelty products were the main focus at trade fairs. Today many trade fair performances serve public relations. “That is why members of FAMAB today more often design communicative booth concepts with large areas that serve more the dialogue and less the product demonstration,” says Elfie Adler. 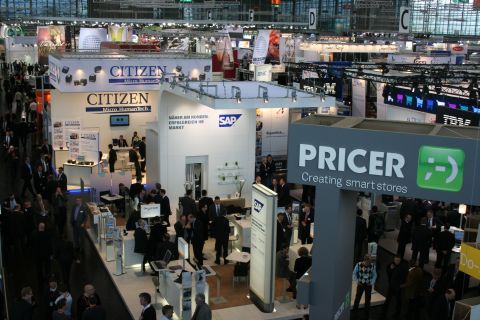 Used correctly, technology assists in trade show communication. And there are plenty of technical possibilities. Some cause quite a stir, others barely get noticed.
Panphonics is a provider of directional loudspeakers. The company from Finland calls its products “sound showers“, since only those who are in a closely confined space can hear the sound. This way, passers-by at the supermarket, the specialty store or at tradeshows are not being bothered. In a EuroShop interview on this focal topic, Panphonics CEO Kari Mettala provides more information.

One important technological means of design at events is lighting. At large concerts, lighting designers pull out all the stops on stage. In store design and at tradeshows, usually lighting attracts less attention. Spots spotlight individual products and panel lights provide background brightness. Light-emitting diodes are more and more in the spotlight and slowly even make their way into the personal living space. While at first only lamps with cool white light were an option, today also warm white and colored mood lighting can be produced by these energy-saving mini devices. Sales associates at the store and booth personnel are glad if LEDs emit less heat than classic lamps.

Digital signage: guidepost to the future and ambassador

Digital signage is also used more and more often at tradeshows. This electronic signage by means of large and small monitor screens serves in guiding the visitors as well as providing information at the booth. Large screens attract attention and create emotions that ideally suit the exhibitor perfectly. Kiosk terminals are more used to provide visitor information. Where can I find a specific exhibitor? That is the question that’s most often asked at tradeshows.

Related articles: - “An exhibition booth is a company’s stage and temporary home“

Related articles: - ”Technology needs to serve the cause “

Related articles: - “Price has never been an issue compared to the added value and sales increase we can yield for you“