The rolling temptation during a shopping trip

Branch managers and sales people have a trained eye. They can already tell customers apart when they enter the store. Those who enter with a shopping cart, have larger needs than the ones in a hurry, who only want to grab a few items and don’t bother taking a cart. In some markets, customers have a choice between a cart and a shopping basket, sometimes also between different cart types. 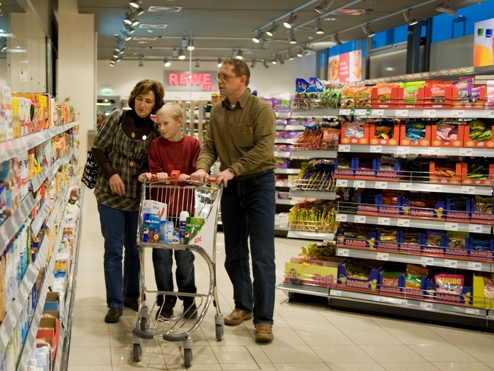 Triumphant in Germany, starting in the fifties

The American grocer Sylvan Goldman is considered the inventor of the shopping cart. In 1937 he provided a “shopping cart” for his customers at his “Humpty Dumpty“ supermarket in Oklahoma City – so they would be able to shop for more items than they could with the small shopping baskets. In 1940 he filed a patent for the cart. The first carts had detachable baskets. In 1951, Wanzl got the patent for the first shopping cart with a fixed basket. Today the metal works factory from Leipheim in Germany’s Bavaria region is the worldwide market leader for shopping carts.

After the monetary reform, shops in former West Germany promptly were full again. This was the time when the shopping basket became too small. In the fifties and its times of “binge eating“, shopping venues became larger. Mom-and-pop got competition from larger grocery stores in the cities. And finally – again modeled after the U.S. – the first supermarkets emerged “in the green fields“, where you could easily park your car. The larger sales floors provided more space between the shelves. The carts got bigger and bigger. After all, psychologists say: The bigger the cart, the bigger the temptation and the bigger the profits.

In the early eighties, German supermarkets introduced deposit systems for their shopping carts. This way almost all customers return their cart to the collection areas, thereby reducing the work for the supermarket staff. The deposit system was not able to become widely accepted in the U.S. Here supermarkets have a lot of staff available for this service. In the parking lots, employees help customers to find a parking spot, and they also tidy up the shopping carts

The hope of retailers to reduce cart theft through deposit systems came only partially true. One Deutsche mark or one Euro today for a large shopping cart – for some customers that’s a small price to pay for being able to push their purchases comfortably back to their homes. That’s why even today in some urban settlements abandoned shopping carts accumulate.

By now retail has a choice between different safety devices in their fight against theft. One physical security device are magnets in the floor, which release clamp spring brakes on the cart’s wheels when someone tries to drive past the lot, and this significantly hinders such an unauthorized leave. Dishonest customers though can lift the cart over the detection loop, because the magnetic range is limited. Electronic safety devices in the floor monitor a wider strip. They can be outfitted in a way to where the wheels start turning again if the cart is being pushed back over the red line. Staff to unlock the wheels again is then not necessary. An electronic safety device is also possible via a radio receiver on the cart, which becomes active if the cart moves too far away from the transmitter. The advantage: The property does not have to be outfitted with a detection loop. The disadvantage: The system is only well suited where the signal can be sent unhindered. The more accurate the GPS signal gets, the better it will work for satellite-based shopping cart safety devices in the future.

Plastic is increasing, metal remains being the classic

Slowly shopping carts with plastic cradles gain in importance. They are more light-weight and the cradles can be ordered in the company’s colors. They are also suited for use of radio frequency identification (RFID). The articles do not need to be individually scanned at the checkout after the purchase. The customers simply push their carts past the checkout and all items are being registered at once, but RFID is still in its beginning stages. Metal baskets interfere with the signals. However, cleaning is more elaborate, because the plastic surfaces offer dirt a larger area than metal rods do.

Traditional metal works companies have long also been part of the plastic scene. Just now, market leader Wanzl wrapped up a deal with Europe’s largest chain store Carrefour. The French outfit their hypermarkets abroad and in their own country with the “Tango“ shopping cart. They choose the large version with its 220 liter cradle volume. Until 2013 Carrefour wants to invest 40 million Euros for new shopping carts. Wanzl introduced the “Tango“ for the first time in 2002. 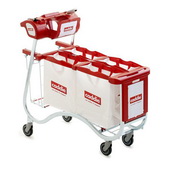 At the EuroShop, Caddie from Strasbourg introduced new shopping carts with removable canvas bags. In our iXtenso interview Eliseo Pavone of Caddie explains the advantages of this system. Nevertheless, he is sure that the good old metal shopping cart won’t become obsolete for some time. The metal works factory J. D. Geck from Altena in Germany’s Sauerland region also hopes that this will be the case. It enters the market for qualitative superior metal shopping carts as a new competitor. In our second iXtenso interview Sales manager Volker Köller explains the background.

Shopping carts are getting more diverse

In the past, chain stores tried to make their carts attractive to customers by small additions. And so affixed magnifying glasses help with reading the small print on items; child safety seats provide safety. At the moment, shopping trends from the U.S. are arriving again: Computers on the cart’s handle are personal shopping assistants, which show directions and sales offers on a colorful display. With self scanners on the shopping cart, registered customers are able to reduce their waiting time at the cash register.

The times of uniform shopping carts in front of grocery stores, home improvement stores and electronics shops are coming to an end. Yet the carts remain something they have been from the beginning – a temptation to buy more than what is on your shopping list.

Related articles: - Shopping cart: There is still room for a new competitor

Related articles: - The shopping cart 2.0 is a modular system for various demands