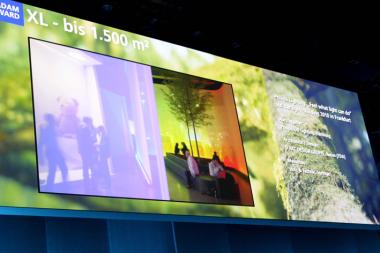 At the awards ceremony for the ADAM Award at the Rosengarten Mannheim Congress Centre, the D’art Design Group was presented with the silver award on Friday evening: the architectural lighting by Philips Lighting at Light+Building 2010 was able to win through in the competition against a total of 20 submissions in the XL (501 to 1,500 m²) category. The D’art Design Group's Managing Directors Guido Mamczur and Jochen Höffler accepted the renowned award for outstanding brand communication.
After the sold-out awards ceremony, the 1,300 guests celebrated into the early hours of the morning at the event location with the 16 ADAM award winners. 93 brand spaces were submitted in total this year for the ADAM Award.

The Jury’s Statement:
The Philips appearance at the Light+Building 2010 was a grand gesture paired with distinct architecture. The visitor experienced, without directly noticing it, how light atmospheres influence the feelings. The light arrangement was first felt and then understood. The fact that Philips limited itself in his appearance to the use of LED technology underlined the company’s market leadership in a subtle way. A multisensory concept with a perfect placement of information.

The Award:
The ADAM Award is presented by FAMAB, the German Association of Direct Business Communications, for superb trade fair and brand appearances. It awards brand and trade fair appearances which exemplarily combine a marketing message, corporate identity and architecture. The ADAM has been awarded annually since 2001.

The Project:
According to the Philips topic “Feel what light can do” a translucent and 260 metres long Light Wave visualizes the topic light and its added value for the human well-being in the Forum at Light+Building 2010. Starting from the stand’s heart pulsating on a luminous fabric membrane there is an interaction of differently shining colour hues and visual moods to which sound installations were added in order to slowly spread the effect of the single light atmospheres into the whole Philips brand space. Thanks to its synchronous contents in terms of light, music and colours the Light Wave achieves unity. Thus the stand design visualizes D’art Design’s views that light has to be considered as a decisive architectonic element.