Shop design: retailers benefit from the image of a brand 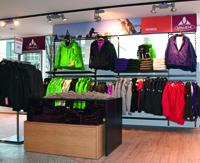 Brand names arouse emotions and wishes. In the racks at retailers however many competing brands are placed side by side. This is why manufacturers open their own stores, where their own brand is properly featured. Brand displays at a department store or at a speciality store are their little brothers. German outdoor specialist Vaude capitalizes on both concepts side by side.

On February 18, Vaude (www.vaude.de) opened up its fourth brand name store in Nuremberg. A sales floor of 175 square meters displays the complete line of goods by Vaude and its subsidiary company Edelrid. Vaude caters to mountaineers and hikers – ranging from tents to matching clothing attire. In addition you can buy trendy backpacks and bags as well as gear for bike riders.

“The feedback was excellent“, reports Thomas Schuh, owner of the new Vaude store. Schuh already owns two other brand name stores in Nuremberg: right next door is a store with textiles by The North Face and in the pedestrian zone is a Levi's-Jeansshop. “I benefit from the well-known brand, but I remain responsible for my business.“ Schuh owns franchises.

In franchising, the brand names determine the shop design, provide the link-up to the IT of the particular operational headquarters, instruct the staff and help in advertising. The retailer however has a say in the range of goods. Since he would not be able for instance to showcase all items by North Face in his 200 square meter store, Thomas Schuh passes on children’s clothing and instead sends the customers across the street to his new Vaude-Store.

Vaude – the name goes back to the initials of its founder – lets the “Spirit of Mountain Sports“ come alive through its interior decoration and provides an alpine flair. The store has shop windows on three sides, which create transparency and a lot of space for the brand presentation. “Nuremberg is an ideal location for us“, says Vaude-Sales Director Jan Lorch. Franconian Switzerland, a mountaineer’s dream territory and the Altmühltal, a favorite of cyclists, are not far away, and even in this university town people often like to ride their bikes. Vaude with its headquarters in Tettnang opened its first brand name stores along with local retailers in Ravensburg as well as Kempten in the Bavarian Alpine upland and in Markdorf at Lake Constance. An expansion – also further to the North – is scheduled.

Brand name stores are not without their share of controversy, because they are dreaded competitors of speciality retailers. Usually they get preference in the delivery of new goods and also receive special conditions. After all, sales for the manufacturer are much greater here than with a full-range retailer. Another competitor joins the mix In Nuremberg: Vaude also maintains a Shop-in-Shop at the fashion boutique Wöhrl (Modehaus Wöhrl).

Shop-in-Shop: From big to small

Fashion boutiques, department stores, shoe stores or consumer electronics stores grant a space to particularly attractive brands, where they can present their products. The options in design for the brand name manufacturer are limited; the Shop-in-Shop is supposed to catch the eye, but should not be too unusual. The staff is usually provided by the retailer, but is specifically trained by the manufacturer. If you make room in your store this way, you definitely expect more sales than you would get from an assorted line of goods. Oftentimes there are automatic ordering processes in place, so you don’t run out of merchandise. And there are also volume discounts. 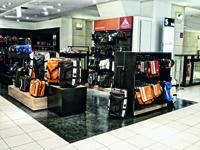 Thomas Schuh can make an easy comparison and realizes the pros and cons of being a franchise owner. He opened his jeans store in 1992 when Levi's and its “501“ jeans were a must-have. Ten years later the blue pants with the buttons became embroiled in price wars and lost some of their image. Having said that, Schuh praises the delivery logistics of Levi's: many sizes, many cuts and many articles – nevertheless logistics works like a charm. “The Americans have a great software and Vaude still needs to catch up and do better.“