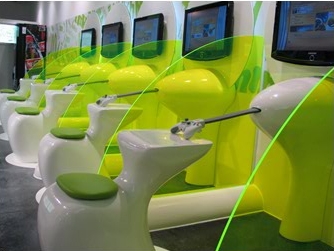 Rousseau Design has created purpose designed gaming areas for X Box at the flagship HMV store in Edinburgh’s famed Princes Street and at the Legoland® theme park in Windsor.

At the HMV store, the design uses 6mm White Perspex® cast acrylic sheet, edge lit with white LED’s, to create the perfect backdrop for wall mounted flat screen monitors. Perspex® Mirror was used behind each wall plaque to further enhance the lighting effect around the edge.

In both locations the wall plaques for the monitors and the screen dividers were laser cut and edge polished by acrylic fabricators K2.

Rousseau chose Perspex® for the HMV project as he was looking for a material that would give a cool illuminated edge effect to create a young and edgy feel for a largely youth audience.

For the Legoland® project, Rousseau chose Perspex® for the solid, bold and bright primary colours and its excellent fabrication qualities.

The guaranteed product performance and hardwearing properties of Perspex® made it ideal for both.