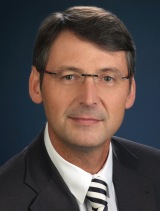 The Epta group with its headquarters in Milan, Italy, produces refrigeration units and cold storage cells all the way to cooling- and air conditioning systems. In 2010 the German daughter achieved about 80 million Euros in total revenue – and not just with retailers. Its customers also include oil companies, logistics companies and multi-unit restaurants. Managing Director, Corporate Sales and Marketing Jörg Straßburger explains which cooling systems are suited for large and which ones are suited for small grocery stores, what the benefits of CO₂ are and where carbon dioxide reaches its limits. And he draws trade fair conclusions after the EuroShop 2011.

Cooling is expensive. Which trends do you see in terms of energy conservation?

Even for cooling conventional refrigerated display cases to normal temperature, energy demand can be further optimized. Our new, UNI EN ISO 23953-2 certified eco-shelves for example come with improved routing of air flow attuned to the glass doors, which results in less energy consumption. For refrigeration units with single glazed doors, the consumption can be decreased by up to 20 percent compared to units with refrigeration night blinds.

In addition, more savings opportunities can be achieved with LED lighting or the possibility of light dimming depending on daylight radiation. Through this, energy consumption can be further reduced by up to 30 percent. What’s more, at 50,000 operating hours, the lifespan of a LED lamp is almost five times as long as that of a fluorescent lamp.

How much waste heat is created during cooling and from the frozen foods segment? Is its use beneficial for heating?
The use pays off, if the use of waste heat is comprehensively integrated into an overall building concept, which controls the energy use in the entire store. In the winter, the waste heat can be used to heat the building and for service water heating. Heating up water in the summer is also possible this way. Depending on the unit design, the potential for efficiency enhancement is high enough to where even in extremely cold temperatures additional heat energy can be saved and another heating system becomes unnecessary.

How big do you think the savings potential in German food retailing is, if all cooling systems were immediately brought up to date?
The savings potential is in the double digit percentage. The exact number is hard to pinpoint, since currently there are different solutions on the market.

What kind of cooling system do you recommend for large stores and what best suits the smaller store around on the corner?
At the moment the CO₂/R134a-Cascade and the transcritical CO₂-system lend themselves to being particularly energy-efficient cooling systems. In the Cascade, CO₂ is only being used for low temperature cooling. In the transcritical CO₂-system, it is used in both low- and normal temperature cooling. Cooling systems like these are already in use in different German grocery stores, for example in the branches of Aldi Süd and Edeka.

What is the benefit of cascade cooling?
A cascade cooling system provides an affordable entry into CO₂-technology and always makes sense if a relatively large area needs refrigeration. Compared to conventional cooling systems, with the cooling agent R404A store owners can cut down about seven percent in energy use. Especially for smaller stores, due to its energetic capacity, low acquisition costs as well as implementation without long lead times and a short amortization period, it represents a cost-efficient entry into sustainable refrigeration technology for food cooling.

So transcritical systems make more sense for large stores?
The transcritical CO₂-system is the type of system where 100 percent of the natural cooling agent CO₂ can be used. Due to its complexity and performance it indeed is recommended more for larger stores sized 1,500 m2 and up at refrigeration loads of about 100 kW. Based on the higher compression ratios in the system, special components must be used. This makes the entire installation more elaborate. At the same time, store owners can benefit from government support programs, if the electric power consumption in new investments can verifiably be reduced by 35 percent.

CO₂ as a cooling agent was an important topic at the EuroShop. What benefits does CO₂ have? Where are other cooling agents superior?
The natural cooling agent CO₂ is not flammable. What’s more, it does not contribute to ozone depletion and in comparison with conventional cooling agents has a negligible greenhouse effect. This is a big plus factor for environmental compatibility. In addition, CO₂ has a high volumetric refrigeration capacity with great heat transfer, and a pressure decrease in the piping of such a cooling system results in only insignificant temperature drops. Compared to other cooling agents, CO₂ however also places special demands on the cooling system concept. For instance, the carbon dioxide pressure increases after reaching a critical point which is at a temperature of 31°C, to 80 to 100 bar and the mode of thermal output changes. This needs to be considered in the conceptual design of cooling systems. 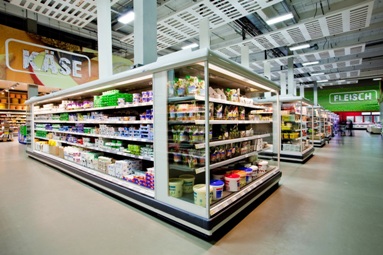 In January of 2010 you outfitted the first store with a new refrigeration technology, which gets by with an evaporation temperature of zero degrees for the cooling agent. What has your experience been after little over a year?
We have implemented the so-called Zero°-Technology in several supermarkets. The Fegro Selgros Cash & Carry store in Eschborn near Frankfurt and the Edeka Aktiv-Markt in Ladenburg near Mannheim, Germany need to be especially pointed out here. The operational experience with the Zero°-Technology is exceedingly positive. The energy consumption in Eschborn, where 98 meters of the new refrigerated display cases are in use, could be reduced by 25,500 kWh. At about 14 meters, the Edeka-Markt in Ladenburg achieves 3,000 kWh less per year. The amortization period of the new technology is two to three years. The retailer’s capital investment therefore paid off.

How do you rate the willingness of German retail companies to invest in terms of the environment – compared to other foreign markets?
In Germany we see a very strong willingness to invest in sustainable solutions, even compared to other countries where our refrigeration equipment is being used. The reason for this primarily is escalating energy costs. The current study of the EHI Retail Institute “Energy Management in Retail 2010" showed that 63 percent of retailers had to spend up to ten percent more for energy last year. In food retailing, cooling electricity costs come in at 44 percent. That’s why 80 percent of surveyed retailers are willing to invest more heavily in energy efficient cooling systems and equipment in the future. When it comes to distribution of sustainable systems, Germany is also leading. Other foreign markets at present are just beginning to implement such solutions.

What trade fair conclusions do you draw after the EuroShop 2011?
We look back on a particular successful EuroShop. Our booth was very well frequented on all days by German customers and prospective buyers as well as International guests, which as a worldwide active company we were of course especially pleased about. At the trade fair, particularly the topics of energy efficiency and sustainability took center stage. In addition, all refrigeration units of our brands Costan and Bonnet Névé, which we introduced at the EuroShop, were certified and labeled with the new energy efficiency label by Eurovent. This label by an independent quality inspection institute was well received by visitors to our booth, since being one of only a few providers, we offer them true assistance in choosing suitable technology. Another highlight at our booth were our visually very unusually designed Eurocryor refrigerated serving counters, which are particularly well suited for specialty shops such as delis, organic food stores or butcher shops and which attracted a lot of attention.