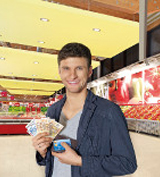 Yet not every German celebrity automatically becomes a promising advertising face. German TV show host and journalist Günther Jauch and the boxing-champion brothers Vitali and Wladimir Klitschko still managed to reveal strong advertising appeal and potential:”Especially Günther Jauch is by far the best in Germany and delivers an unmatched performance bar none. Needless to say, in individual cases the fit to the target audience, brand and product needs to be examined. Unfortunately, Mr. Jauch has not done any advertising for some time now”, knows Johanna Clary, Head of Business Development at cpi Celebrity Performance.

The Berlin consulting firm rates German celebrities based on their suitability as brand ambassadors and analyzes their overall advertising appeal as well as the brand and product fit in particular cases. The data flows into a ranking (cpi index), with which Clary and her colleagues consult companies from all industry sectors to determine which celebrities are suited for their planned marketing strategies. In addition, the celebrity performance in social networking websites is rated and compared to predict advertising effectiveness. "This way we are able to assess for instance whether a celebrity is suited for a viral campaign or not", Clary adds.

Yet which factors determine whether a celebrity is a good endorsement or not? Especially likability and authenticity play an important role in this. Professor Gert Gutjahr, Managing Partner of the Mannheim Institute for Market Psychology (IFM MANNHEIM) points out that endorsements are meant to credibly recommend a product. Certain trustworthiness is essential. ”Thomas Gottschalk is Germany’s clown. He can make children and people in general laugh“, says Gutjahr. ”No wonder his endorsement works for Haribo, but not for DHL.“ Gottschalk has that certain something Gutjahr calls advertising credibility. This comes from Gottschalk’s personality and his image in public.

In May 2011, Clary and her colleagues were able to prove within the context of a landmark study that a positive celebrity image is the decisive factor for a successful endorsement. Active athletes rank on top in this instance. ”They are trustworthy and people expect further successes from them“, Clary explains. ”Once successful athletes have ended their career, their value generally also decreases.“ At that point, other factors determine whether the person still works for endorsements. After she ended her sports career, Steffi Graf was mainly perceived as a loving mother and wife. Her clean public image is therefore not comparable to Boris Becker for example, whose past athletic success was overshadowed by personal escapades. 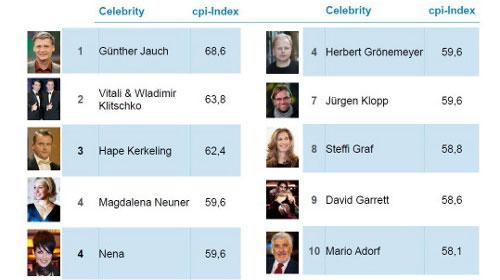 Not only successfull as a TV show host, but also as a testimonial: Günther Jauch.

The REWE example also shows the important role likability and being a role model play:”Our celebrities have to present a positive image in all facets of their personality, which generally matches the REWE brand“, emphasizes Raimund Esser, Director of Corporate Communications at REWE Markt GmbH.

REWE promotes many initiatives that represent healthy living and exercise. The company is not just the jersey and primary sponsor for German soccer club 1. FC Köln (Cologne), but is also the ”official nutrition partner of the Germany National Soccer Team (DFB)“. ”Freshness, quality and a large product selection have convinced the DFB of REWE being a long-term partner for competitive athletes“, says Esser. ”Our focus is on exercise and diet. Of course, competitive athletes – men and women – function as role models for this.“ This is why the company specifically placed TV commercials featuring the sports heroes during major soccer events such as the European Soccer Championships and World Cups of the past few years.

A lucrative business – on both sides

Not just companies like REWE pay a lot of money for celebrities like Lukas Podolski and Thomas Müller. Gutjahr and Clary confirm that German companies generally invest between 50,000 and one million Euros for a TV spot. On an international scale, this number can go up to three million.

This investment pays off. A study by cpi Celebrity Performance on advertising appeal revealed: consumers who recognized and liked the celebrity in a TV spot, rated the TV ad and its brand significantly more positive. In addition, afterwards customers visited the company’s homepage more frequently and purchased items. ”A good portion of the increase in turnover could be traced back to the celebrity“, adds Clary.

Ultimately, the use of endorsements is about the increase in brand awareness and brand equity. ”At REWE, we constantly monitor both through our own marketing research. Our brand awareness has outstandingly developed“, explains Esser. This makes REWE just one example that proves that in retail, endorsements can yield benefits for the brand as well as the company.