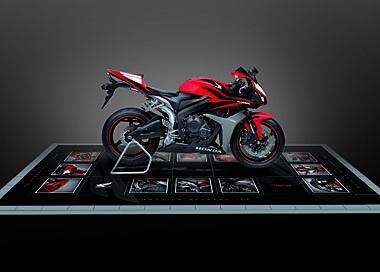 FWI bv is proud to announce that PromoDek is the winner of the Goulden Pauw Award at the POPAI Benelux POP Awards 2007.

The PromoDek is the ideal way for the brand and models of Honda Access Europe to be promoted in the showrooms of the dealers. By using loose elements, pictures and inlay-material, the PromoDek can always be used for other campaigns and product interoductions. It is therefore possible to create a new, unique and distinguishing PromoDek for each model. The PromoDek has been described as flexibility and suitability. The jury of the 2007 POP awards have described the PromoDek as a clever application of the material. It fits the product (Honda motorcycle) and it can be used according to what is necessary. Fantastic!