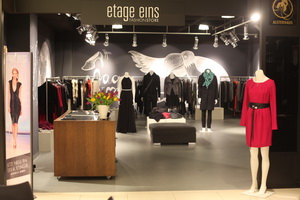 Changes in product lines in retail happen faster and faster, but what’s now hitting us more and more from the U.S. is even more short-lived: pop-up stores are only open for one day or a few short weeks. What started with a few clothing racks in condemned houses as a platform for young designers, is now also taking branded companies and town centers by storm. From the get-go, the Internet was crucial for its promotion.

The harder it is to get something, the more desirable it becomes. And new stores spark interest in consumers. The novel pop-up stores take advantage of both of these experiences. The companies are prepared within a few short days, open suddenly (pop-up) and disappear just as quickly. The furnishings of the stores that are also called “Guerilla Stores“ are mostly sparse and there are also big savings in terms of advertising costs: customers are wooed by word of mouth, with web pages or via social networks.

The whole thing is staged as an event. Drinks and DJs guarantee a great atmosphere. Most young customers receive personal attention from the producers of the merchandise. Producers – those are often fashion designers. New labels call attention to themselves with pop-up stores. The merchandise often hangs on clothing racks against the backdrop of bare walls. These are usually single pieces or samples from which you can order right in the store and have them delivered to your home. Matching the respective staged spirit of life, CDs, DVDs, books or accessories are also being offered. 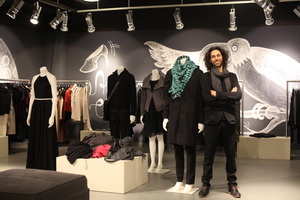 The response is often enormous – measured by the mostly small budget. Bloggers write about the brief shopping opportunity before the event and then describe their impressions after their visit. Facebook and Twitter friends pass tips along. Journalists also report about it and also increasingly the serious media – as do we here at EuroShop.de.

The American CBS Television Network showed “Pop-up Store Phenomenon“ right before Christmas in its news broadcast. It showcased the first short-term retail store by eBay in New York and seasonal stores by Toys R Us and GAP. What worked in New York on Fifth Avenue also worked in London: From December 1 – 5, 2011, eBay opened up a pop-up store in the West End of London. On display were potential Christmas gifts that visitors were able to order via 2D barcode with their cell phone to have items delivered right to their doors.

Pop-up at the Alsterhaus department store and in small towns

The first pop-up store in Germany reputedly opened in 2004. Slowly the trend is gaining momentum and pop-up is becoming respectable. Since the beginning of this year select Germany fashion designers show their current collections at the “Etage Eins Pop-up Store im Alsterhaus“. Together with the KaDeWe department store in Berlin and Oberpollinger in Munich, the Alsterhaus at the Jungfernstieg in Hamburg counts among the elite group of Kaufhof department stores. The ambiance is a far cry from trash and scantiness. The store design with its well-directed accent lighting is more reminiscent of a boutique. It’s all over and done on March 15. What happens after this is still a secret, it hints on the Facebook-Seite and raises consumer expectations. 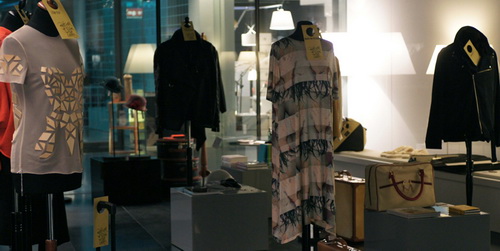 “That’s a benefit for the entire city center“, Brigitte Engler from Hamburg’s City Management says excitedly, “because the small special labels don’t just provide change and inspiration, but also make the city of Hamburg unique.“ “Etage Eins“ founder Freddy Mouchawrab: “We would like to make the independent labels accessible to a large audience as a platform for German fashion design – this works best with a joint appearance in the city.“ Six years ago he founded a concept store in Hamburg‘s stilwerk (www.etage-eins.com). Without any detours to expensive trade shows and the commission business, selected labels were able to lease individual racks or areas for their sometimes small collections. Since then more than 30 designers have showcased their collections here.

In Coburg in Northern Bavaria, far away from any hip metropolis, one local Design student picked up the pop-up idea. With a lot of her own hard labor and supported by the local city manager, she fixed up a vacant former bakery and offered self-made accessories, among them pins with bratwurst (German fried sausage), “also available with mustard“. That’s a great idea to take advantage of vacancies, says the city manager.

By now things are just like they are with many developments from ghettos and suburbia: marketing professionals borrow the ideas, professionalize the business and in doing so make a lot more money than the inventors. Klein for instance gave Austrian Sonja Weinstabel her start. In Vienna she developed her own shop concept for fashion, magazines, books and design with her label “w?atf – what about the future“(www.whatatf.com).

From December 7 – 18, 2011, w?atf was a guest at the Sofitel luxury hotel near the Stephansdom (St. Stephan’s Cathedral in Vienna). The invitation read: “Meet you at 6 pm in the lobby!“ From 1 pm mannequins in the lobby showcased a fashion design exhibition by Viennese newcomers; at 6 pm a pop-up store opened for two hours, where aside from the fashion design of the exhibition more pieces of the designers as well as magazines, books, spa products and fine travel accessories were being offered.

With an especially compiled bundle of fashion, music, magazines, books and design, in July 2011 w?atf moved into the spacious “Sonnensegel“ gallery and bridged the summer recess there. They went to great lengths to create a festival ambiance with product presentations, performances and parties.

Many branded companies portray an image of themselves that’s true to the spirit of the time. Pop-up stores apparently fit very well into this concept. Reebok celebrated a “VIP Preopening“ for its Reetone shoe collection in Munich with a pop-up store. Model and singer Eva Padberg was one of the guests. The brand ambassador guaranteed proper media coverage – and naturally a video of the event was put on Youtube.

Shopfitting companies and store designers might smirk about the development, since they think long-term after all. For retailers investments should pay off. Some things however are already being staged with a lot of effort to show signs of wear and tear and this is called vintage look. Even if pop-up stores are not an alternative to chain stores – the thus emerging Zeitgeist (spirit of the time) could definitely rub off.

Weitere Beiträge zum Thema: - “A display has to first and foremost wow people and whet their appetite“