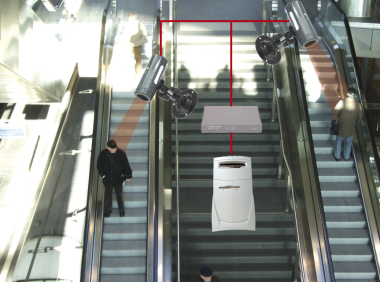 Although the infrared sensor IRS 320 is operating very successfully worldwide, DI-LAX has developed a new sensor for use in people counting for stationary applica-tions. Now you might be asking yourself: "Is this really necessary?" The answer is "yes and no".

"No", because the OptoCount sensor cannot completely replace the IRS 320, and "yes" because with it, the DILAX portfolio has been extended to include a new tech-nology that makes people counting possible from greater heights and also allows concealed installation.

Up to now, DILAX systems have used only infrared light beams with background ex-traction for people counting and detecting movement direction. Now OptoCount will also use a CMOS image converter as a counting sensor. The converter collects im-age sequences and sends them to the PCU, or people counting unit. The PCU con-tinuously monitors the image sequences, using a mathematical algorithm to detect movement of people in either direction. The movement of persons causes alterations in the single picture-information that can then be analyzed. That analysis yields a fig-ure representing the number of people entering and leaving an area.

The PCU then transmits the counting data, tagged with location and time, to the Dav-isWEB Enumeris data management software via a network connection. To cover lar-ger areas, multiple OptoCount sensors can be combined into an array. A mixture of OptoCount and IRS 320 sensors can be deployed without difficulty. The boundaries between