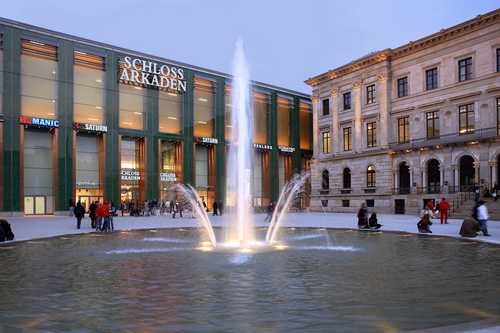 This picture is deceiving. Old does not meet new here. Just like the “Castle-Arcades“, the Braunschweig Castle is a new construction – albeit built true to detail of the historic example. © ECE

City centers are in competition with the green countryside: In the one place you find quirky alleyways and a homey atmosphere – the other place offers large shopping centers with free parking spots. Many retailers view monument protection as an obstacle. Oftentimes it’s old-established family businesses that remodel their stores with a lot of love – and even more money. But how do you bring large modern shopping areas into the old city centers?

Until just after the turn of the millennium, the “Schlosspark” (palace grounds) in Braunschweig, Germany, were urban waste land. At the end of the fifties the war-damaged castle was demolished. The trees that were planted in the sixties by now formed a green zone. In recent times however, the park was also a meeting place for junkies. Based on the example of Dresden’s Church of our Lady (“Dresdner Frauenkirche“), citizens interested in history wished for the reconstruction of the castle, but without an adequate designated use there were no investors. But finally a way was found: A modern shopping center behind the rebuilt castle.

Are you allowed to do that? Can you rebuild an old building without the old rocks? This question is also being discussed for the Berlin City Palace (“Stadtschloss”). At least in Dresden the old debris was still available. Only a few remains were left in Braunschweig. Building something old from nothing? Critics, members of the German Green Party and the SPD party in the city council talked about “backdrop architecture.” The fact that in the end the ECE, the operator of the shopping center, was awarded the contract only confirmed their criticism of commerce at the expense of history. In the EuroShop interview Dr. Ursula Schirmer, spokesperson of the German Foundation for Monument Protection (“Deutsche Stiftung Denkmalschutz“) also voices her discomfort.

Marianne Weigmann from the neighboring town of Wolfenbüttel was among those critics. The retired teacher, who is well schooled in the history of the Guelphs, visits the nearby Braunschweig quite often and is involved in the circles that are interested in history. She has collected all of the newspaper articles on the construction of the castle. “Braunschweig gained a lot with this castle.“ This is her conciliatory conclusion today.

The “Castle Arcades“(“Schloss-Arkaden“) is a shopping center in the shape of modern glass architecture, opened in March 2007, with a sales area of about 30,000 square meters on three levels, 150 shops, restaurants, cafés and a gourmet market hall. Marianne Weigmann does not think it is pretty, but she notices that a new stream of visitors have come to the town. Some people use the Center as a shortcut for their shopping.

Above all, her concern pertained to the town’s library and the town archive. They both got much larger rooms in the newly rebuilt castle with modern technology to preserve assets. The North wing now houses a museum and there are performances in the red hall. A citizens’ initiative collected donations for the move of the equestrian sculptures of Duke Carl Wilhelm Ferdinand and Duke Friedrich Wilhelm. Since July 2007 they have returned to their spots in front of the castle. This spot was newly designed and the transit traffic reduced. “Now the spot has turned into a bustling meeting place, “ says Marianne Weigmann.

How the gap between old and new can be bridged, is something Wilfried Brückner also deals with. The 70-year old civil engineer was Building Mayor of Schwäbisch Hall for more than two decades. The once free imperial city in the Northeast of Germany’s Baden-Württemberg already had a color design ordinance for the historic city center in the seventies. Brückner caused a nationwide sensation, because he also permitted modern buildings in the old ambience. 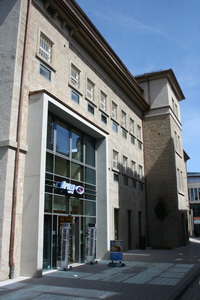 When the nondescript functional building of the Federal Reserve Bank in the pedestrian zone became vacant, Brückner pushed for its demolition. A structure that locals call the “glasshouse“ was built, but what was initially meant as an insult is accepted today. Completely surrounded by glass, the neighboring timbered houses show their reflection in the gabled building. At first the fashion chain store Hettlage moved in, but after they went bankrupt and a next tenant couldn’t be found, the public library moved in. The stream of visitors associated with the library livens up the entire pedestrian zone.

Brückner doesn’t think much of “dollhouse architecture.“ Only very few towns can afford an unconditional adherence to the old, like for instance Rothenburg, which only lives from its tourism. That’s why in almost all old towns you have to “consciously advance the middle of the town with worthwhile architecture, “ he says. Of course in doing so, you run the risk of covering up the old with modern stylistic elements. The modernistic oftentimes is held as less enduring. At that time, Brückner definitely also drummed up support for the needs of local retailers, who loved to renovate their old houses.

When the veteran impartial mayor had to make room for a younger one from the SPD party, at the end of the nineties Brückner also saw that his time to leave had come. The new, young team wanted to change a lot of things. Brückner talks about this without any bitterness. Today he lives in Stuttgart and says he no longer visits the city a lot. His advice for all city planners: You need to approach people, develop new things in a consensus and in addition put your own ideas up for discussion. However, in many places Brückner misses a comprehensive quarter management. Instead the planning is divided into small sections – around the areas that an investor considers at the moment. “Just like anywhere else when it comes to culture, money has gotten tight for the culture of building,“ is Brückner’s conclusion.

He does not want to comment on the new “Kocherquartier“ (the Kocher quarter) in Schwäbisch Hall. On the site of the former juvenile correctional facility, located directly at the old town wall, a modern shopping area was opened in April – the largest building project in the city center since the Great Fire of 1728. Since outside of town on the green meadows two new shopping areas were built, it got increasingly quiet in the old town. For years city councilmen discussed a use for the prison which was built by the King of Württemberg in the 19th century. 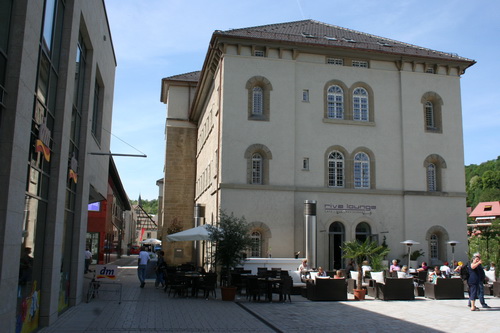 Old and new in Schwäbisch Hall: The “Kocher quarter“ was opened in April. © Schellbach

In the first blueprint plans, a lot more of the old building matter would have been kept. On difficult bedrock, directly adjacent to the Kocher, the river that flows through the town, 43,000 cubic meters of concrete and 6,500 tons of steel were used for construction. For about a 100 million Euros, an underground parking garage, 13,000 square meters of sales floor and directly next to it the new headquarters of the VR-Bank were built.

Builder of the “Kocher quarter“ was the city’s building society. It, and not the shopping center owner, is responsible for its operations. Emphasis was placed on “key tenants“, which are supposed to provide for the stream of visitors to the new quarter. Among the tenants are C&A, dm-Drogeriemarkt, Douglas, Görtz, Gerry Weber, New Yorker and Tom Tailor. Critics see the same store mix here that is also existent in many other cities. Yet slowly the routes in the city are changing, just like they did in Braunschweig. Whether the historic old town will profit from this, remains to be seen.

Braunschweig and Schwäbisch Hall are just examples. Retail defines the face of all inner cities. Where there is historic building fabric, the adjustment to modern trends is a sensitive issue. In the end, customers decide where they want to shop. And in some places, tourists are extremely important customers.

Related articles: - ”Unique features“ are also important in the cityscape