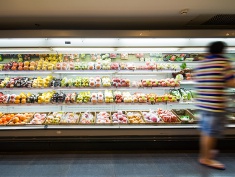 The climate protection debate in retail is particularly determined by the buzzword ”sustainability“. Cutting costs and increasing cost effectiveness at the same time are also vitally important for successful management in the food trade. Even though the topic of sustainability is playing an important role for most operating companies, one particularly important factor is still being neglected in many supermarkets and chain stores: the energy use of cooling systems and refrigeration equipment.

Yet there are often immense savings potentials in cooling technology. After all, cooling systems are one of the biggest “energy hogs” in the food trade. Between 40 and 60 percent of the overall power consumption are allotted just for this equipment. A big portion of their power demand can be reduced with relatively simple measures. Now there are new, energy-saving cooling units and cooling technologies available that amortize quickly.

Climate protection and efficiency have to be linked together

According to information by the Bavarian State Ministry of the Environment, Public Health and Consumer Protection, energy costs of cooling systems and refrigeration units are generally higher than the original investment costs. This also applies to the purchase of new equipment: careful planning of the new cooling technology solution can significantly reduce energy consumption and thus also energy costs. Especially against the background of continuously increasing energy prices, retailers should consider investing more than before in energy-efficient solutions not just for environmental, but also for economic reasons

Now, the willingness to invest is higher than ever: according to the latest research, up to 95 percent of German retailers want to tackle several energy projects within the next one to two years. The focus in non-food retail is on lighting and in the food trade also on cooling systems, since these areas can achieve the largest reduction in costs.

Energy-efficiency and emission reduction is not just an issue for the large retail chains: medium-sized retailers in particular are planning investments. More often than with the large chains, heating and air conditioning systems and also cooling units are technically outdated and use up to 30 percent more energy than modern equipment.

Opportunities to save energy are for instance:
• Exchange of outdated cooling and heating systems
• Installation of heat pumps to utilize waste heat
• Optimizing building insulation
• Structural alterations for improved use of natural light
• Light control for outdoor installations
• Implementation of a comprehensive energy management system to control all energy consumers in the building

An overall concept that considers all or at least several factors promises the most success in this case. How this works can be seen in the Aldi Süd example: the Fraunhofer Institute for Solar Energy Systems ISE along with a planning team and manufacturers designed a holistic concept that is already being tested in an Aldi pilot market. ”In doing so, we were able to reduce energy consumption by 25 percent compared to a traditional supermarket", says Nicolas Réhault, Team Leader at the ISE, in a current EuroShop.de interview.

However, especially medium-sized businesses often don’t have the necessary budget available to comprehensively modernize their equipment. Yet by paying attention to some simple rules during the installation and operation of cooling systems, they are also able to avoid or correct the most common mistakes:

• The cooling temperature should always be as low as needed and as high as possible. Products that are cooled at lower temperatures than necessary cause increased energy consumption and unnecessary costs.

• External heat gets into the cooling units largely through ambient air. This frequently happens due to incorrect loading, when too many products are being loaded and/or stacked the wrong way and distributed or if the intake ports are being blocked. That is why employees should be asked to check regularly whether customers “redistributed” the products.

• Heat radiation from the surroundings also has a negative impact on energy levels. Ambient air temperature that is increased by 5°C already increases energy consumption by 10 to 15 percent. This is why cooling units should not be exposed to sun if possible. Yet even if open refrigeration units are in a drafty spot, an unintentional air exchange takes place. Cooling units should therefore also always be arranged in groups and on opposite sides.

• Oftentimes delivered items are stored temporarily in cold storage rooms or cold stores. Even though these spaces are insulated all around, warm, moist air still flows through the opened doors into the cold storage room. Revolving doors or strip curtains safely reduce air infiltration energy loss.

According to a German nationwide study by IBH Retail Consultants, 60 percent of respondents indicated they also make their purchase decisions based on whether companies act sustainably in their daily business operations. When it comes to cooling technology, particularly the choice of cooling agent for the equipment contributes to increasing sustainability. Natural cooling agents like ammonia and CO2 are already used worldwide, because they only have a very low global warming potential and cooling equipment in supermarkets can be operated in an energy-efficient manner by using them.
Among other things, environmental conditions determine what equipment is suited for a specific location. Carbon dioxide for example can no longer be liquefied at warm ambient temperatures of more than 26 °C. CO2 solutions are therefore used in zones with a moderate climate such as Canada, Scandinavia or Central Europe. Ammonia/CO2 cascade systems on the other hand also present an option for cooling in an environmentally friendly and efficient way even in warmer regions. Ammonia is currently deemed the most energy-efficient cooling agent on the market.

Additional energy savings are achieved through waste heat recovery. The waste heat of cooling systems is used for instance for domestic hot water recirculation and to heat the supermarket. The remaining residual heat ends up outside through a condenser on the roof.

These days, modern cooling systems with natural cooling agents present a good alternative for retail. Over the past few years, research studies and development work has resulted in the fact that natural cooling agents are applicable in an energy-efficient manner in many areas today. The frequently still higher investment costs for the new systems can be – depending on life span – counterbalanced by reduced energy costs and less spending on cooling agents.