How to get great media coverage as an exhibitor 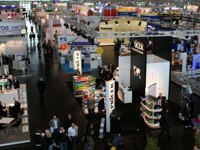 Trade fairs are important appointments for journalists. You meet all the competitors in one place, but the coverage already starts a long time before the trade fair. Yet many exhibiting companies do not want to let the media see their deck of cards too soon – for fear of the other competitors, though more often than not, because internal planning starts too late and the press is informed “at the eleventh hour.”

Trade fairs raise expectations – in journalists as well as their readers. What can we expect on trade fair days? Is a visit to this or that trade fair booth worthwhile? That is why companies should provide information early on about individual trade fair novelties and offer applicable interview partners. This way you may succeed in being mentioned in reports that are released before the trade fair. These present an important source of information for trade fair visitors.

A look at the press boxes at trade fairs shows suffices to see the amount of information journalists are confronted with on trade fair days. A good press relations associate therefore already has communicated his/her most important announcements to the media in the forefront of the trade fair.

Especially for trade publications, a trade fair is an important reason for advertisement acquisition. People in charge of marketing should not make a connection contingent on news coverage. If journalists are given a choice with equal exhibitors, they will more likely listen to the one that also advertises. Reports and advertisement should be issued in several releases if possible – as you can also book an advertisement long in advance.

Advertising folders cannot replace a press release. A journalist is not a customer; he does not want to buy the product, but report about it. He is interested in one question: How does this product/service benefit my readers?

It is not just advertising folders, but also many press releases that are written like advertisements. Journalists want a matter-of-fact newscast.

One nuisance continues to be product spelling. Trademark symbols and long names in UPPER CASE LETTERS have no business in press releases. Many editorial departments moved to writing product- and company names with a capital initial letter.

Each text should contain the name and contact details of the media contact person at the end. Instead, many companies enclose a business card in their press kit. The information gets lost, if the journalist discards the kit and only files one single report.

Especially in smaller companies, the director of the company is the only person in charge of media contact. In that case he/she should also be easily accessible. Those who put off journalists throughout the day by their office, lose the race in the news business to their competitors.

If you involve an agency, it is better not to use an advertising agency, but PR experts, who themselves have experience as journalists. They should not only write press releases, but also be allowed to provide expert information. Otherwise journalists would rather call some employee they know at the company.

Many press kits are completely excessive, because each department wants to be “in” them. With that, the focus on the essentials gets lost. This is how “old hats“ end up in the press kit, which should actually only be used for current affairs.

The Anglo-Saxon region has the custom to attach tightly printed credits with basic information about the company at the end. This great idea though is frequently reduced to the point of absurdity by using interchangeable flowery phrases. Everybody claims to be the market leader or one of the biggest companies with innovative products and services.

Useable photos are very important. Often cropped product pictures are provided, yet photos that show the products in their hands-on application are more credible. Software companies have a harder time with this than suppliers of equipment that can be easily photographed. Nevertheless, those who have original ideas have an easier time being published in the media.

A CD with reports and photos belongs in every press kit, because more and more journalists are used to working directly on reports instead of scribbling on paper. The digital press kit naturally should also be provided on the press page of your own Internet site and available as a download.

Press kits are an information medium. A clear description and not using exquisite materials are essential here. Printing in glossy paint or semi-transparent plastic covers are worthless bells and whistles. Environmentally conscious journalists resent having to separate waste at their desk.

And last but not least: press relations are continuous public relations. The trade fair is only one occasion of many for obtaining press coverage.

Further articles to the Topic:

Further articles to the Topic: - “An exhibition booth is a company’s stage and temporary home“