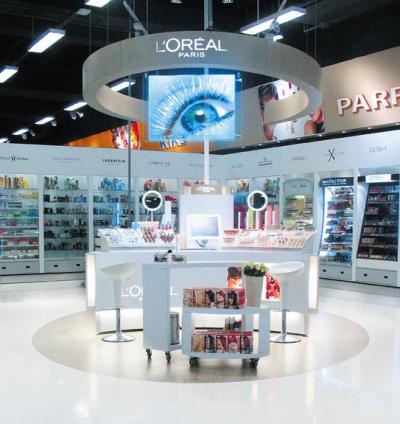 - The dynamic screen has generated a lot of traffic to the L'Oréal shop-in-shop. After the screen was installed, it has contributed to a dramatic increase in the sale of L'Oréal products in the cosmetic department, says Category Manager, Christian Vilmar, of L'Oréal Denmark.

L'Oréal has developed the "Island of inspiration” concept in Denmark together with Danish Supermarket. And so far, L'Oréal has launched the shop-in-shop concept in two supermarkets in the Bilka chain, including Bilka in Fields Copenhagen - one of Northern Europe's largest malls.

- We were introduced to the dnp Holo Screen and were very excited about it. It is much easier to fit into a shop environment than a traditional TV and much more elegant, says Design & Decoration Manager in Danish Supermarket, Finn Klausman.

On the ”Island of inspiration” - probably the first of its kind in the world - customers can experiment digitally with make-up via a camera and specially designed software. They can see the result on a computer monitor and print the result for further evaluation at home. The 40” dnp Holo Screen works as a lighthouse on the island and boosts the traffic by displaying TV commercials from L'Oréal.

- Our customers' reaction to the transparent screen, which seems to be floating in mid air, has been very positive. The screen has a perfect position offering a straight view from the main aisle, which runs from the entrance through the store. And it generates quite a lot of traffic to the L'Oréal shop in shop.

Besides the dnp Holo Screen at the L'Oréal shop in shop, Bilka has installed dynamic dnp displays in the toy and sportswear departments. And Danish Supermarket has decided to make dynamic displays an integral part of the future design concept in other Bilka stores in Denmark.

The dnp Holo Screen will be on display at dnp denmark's stand at Euroshop in Düsseldorf, Germany from February 19-23. For further information, please visit dnp at stand 6G, Hall 6 - or contact General Manager, Sales and Marketing, Søren Busk or Marketing Manager, Lisette Rønnov Jørs at +45 46 16 51 00.

Photo: dnp Holo Screen at the L'Oréal shop-in-shop in the Bilka supermarket in Fields Copenhagen - one of Northern EuropeŽs largest shopping malls.