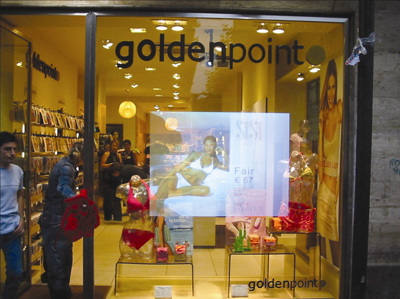 A 42% increased sales average, 162% sales lift for impulse items, 16% net sales lift on chocolate snacks… The effect of dynamic POS advertising is both dramatic and well-documented 1). Now, one of the worlds leading screen manufacturers, dnp denmark, offers a powerful alternative to plasmas and flat screens for retailers who want larger screens that take up less space.

The perfect eye-catcher
The "Flying Screen” is a new media concept that creates maximum impact and takes up minimal retail space. This is achieved by rear projected video onto large optical screens, which are suspended from the ceiling with the projector hidden in the ceiling well out of sight. This means that the total exhibition area is actually expanded with a "virtual” retail space in mid-air. Flying screens come in sizes up to 120” offering a total display area, which is 4 times bigger than a 60” plasma or flat screen.

Holographic effect
For use in window displays, dnp denmark has developed the dnp Holo Screen, which allows passers-by to both look at and see through the screen. A unique optical effect that has caught the attention of brand leaders such as Nike, Sony, LŽOréal and Harrods, which have all used the dnp Holo Screen in point of sale campaigns.

- With the dnp Holo Screen, we are moving one step closer to providing retailers with the perfect flying POS media, which - apparently floating in mid-air - allows decorators and interior designers to bring new life, elegance and effectiveness into window displays and in-store environments, says General Manager, Sales and Marketing, Søren Busk, of dnp denmark.

Flying screens uses the same image sources and formats as TV displays, and can easily be used in networks together with other display types such as plasmas, flat screens and LCD panels.

Flying screens will be on display at dnp denmark's stand at Euroshop in Düsseldorf, Germany from February 19-23. For further information, please visit dnp at stand 6G, Hall 6 - or contact General Manager, Sales and Marketing, Søren Busk or Marketing Manager, Lisette Rønnov Jørs at
+45 46 16 51 00.

Photo: dnp Holo Screen in the window of one of the 300 "Golden Point” fashion shops in Italy. The Golden Point chain is the retail outlet of Golden Lady - one of the world's leading manufacturers of women's stockings, underwear and swimwear for women and children.