Beacons and small steps toward increased sustainability in retail

Green IT, green supermarkets, green products – green is “hot“ at the EuroShop. Retail is very aware of the trend toward sustainable economic management. Those who conserve natural resources can do something for their own image. But a lot is only done if it also pays off. In some cases, retailers need to heavily invest first. What is show and what is truly sustainable?

Green supermarkets have been in the headlines for some time. Earlier this year, German Federal Minister of Economics Rainer Brüderle visited the “Klimamarkt“ (“climate market”) by Tengelmann, across from the Tengelmann headquarters in Mülheim an der Ruhr.
The politician of the FDP party said: “We need pilot projects like this to gather experience on how climate protection and economic efficiency can be reconciled.“ Tengelmann deems the “Klimamarkt“, which already opened in December of 2008, to be “Germany‘s first CO2-free supermarket.“

The project admittedly does not stand up to an intense cost effectiveness analysis. “Demolition and new construction would have been cheaper“, Tengelmann spokesperson Jutta Meister admits on inquiry. “But we wanted to show that such a project is feasible.“ “Such a project” – by that she doesn’t just mean that retailers invest in ecology, but she also refers to remodeling an existing real estate property.”After all, most stores in food retailing already exist“, she says and thus also distinguishes herself from green supermarkets that were built completely new.

EuroShop.de already reported on the “Green Building“ opened in November 2009, a showcase supermarket by Rewe in Berlin-Rudow, which spends about 40 percent less energy than a regular “cookie-cutter” Rewe market (detailed video at tv.berlin).

This roughly thousand square meter sized pilot marketplace is CO2 neutral. This means: heating-, air conditioning-, lighting-, climate- and cooling systems don’t pollute the environment with carbon dioxide emissions. 456 cubic meters of the renewable resource wood were used – wood, which during its growth was binding CO2. Daylight in architecture and intelligent lighting control that depends on daylight reduce power consumption, of which one third is covered by a photovoltaic roof system. Rewe already received several awards, including the ”Store of the Year“ award by the HDE.

We also introduced the Spar-Market in the Austrian city of Murau – also a new construction, opened on September 29, 2010 with a useable floor space of 1035 square meters. Overall, Spar in Murau wants to annually reduce about 80 tons of CO2. This equates to the consumption of 26 households. To do this, the building needs to be designed like a passive house.

The economic aspect of sustainability

Tobias Walter from tegut is critical of such milestone projects. Even though the Chief Executive for all store building projects of the anthroposophically-oriented Gutberlet-Stiftung (Gutberlet Foundation) appreciates them because they signal a rethinking in retail, he questions their practical use however, since they will barely amortize. Sustainable economic management is an integral part of tegut’s corporate policy – long before the idea became fashionable. “For a long time, we did not make any money on this“, says spokesperson Andrea Rehnert. But by now consumers are rethinking. In 2010, tegut recorded a double-digit revenue increase in its organic product line and thus grows in this area more than conventional food retailers.

“We will continue to advocate for more local and ecologically worthwhile produced groceries with our partners – and at the same time design our markets more and more sustainably“, Tobias Walter emphasizes. “Our past experiences show, that it is also possible to incorporate the four aspects of sustainability in supermarkets, and besides ecology, economy and social aspects also to meet the cultural level of an attractive building."

With its cultural demands, tegut wants to offer its customers and employees “a pleasant, respectful stay at the marketplace“ – by using natural materials like wood and glass or by “designing and developing the architecture, factoring in the property and its environment“, Walter says. He lists the tegut store in the Maberzeller-Strasse (Maberzeller Street) in Fulda as a successful example for this: on a triangular property, the available space was optimally used. In Limburg, Walter was responsible for the renovation of a landmarked railway plant – “an amazing architectural symbiosis of an old factory building and a modern food store“, he reports proudly.

“Particular attention also always needs to be paid to the economical aspect of sustainability“, says Walter. “We build beautiful marketplaces for our customers, which thanks to our consolidated know-how generally are not more expensive than the otherwise widely common 'shoe box buildings’”. In our current EuroShop interview Kai Falk, Managing Director of Communication and Sustainability at the German Retail Federation HDE also believes: investments in sustainability in retail have a chance on a larger scale only if they also pay off financially.

Energy prices in retail sales are turning into a crucial cost factor for this industry. After only a brief recovery period due to the economic crisis, they picked up even stronger than expected by many retailers, as was revealed in a survey on energy management in retail by the EHI Retail Institute in Cologne. While retailers in 2009 still assumed an increase of about 8 percent, 63 percent of the currently polled companies indicated that in 2010 energy costs in their companies increased by up to 10 percent: Many fear further increases of similar proportions. The extent of energy costs though depends on the industry sector. In food retail, according to the EHI more than 55 Euros per square meter of sales floor are incurred for energy, in which cooling at 44 percent accounts for the largest electricity consumption. In non-food retail on average 31 Euros per square meter need to be spent. Here the largest portion at 65 percent is caused by lighting expenses.

The EHI notices a large willingness in retail to invest. 80 percent of polled retailers are said to be willing to invest in energy-saving cooling systems and equipment. This high readiness can be explained by savings expectations of up to 20 percent. Aside from investments in new cooling devices, the choice of cooling agent is also getting more and more important, especially since the old R22-systems have to be converted. Cooling with CO2 is one of the big trade fair topics at the EuroShop 2011.

The most significant change per the EHI is in the investment willingness in the area of building services engineering and construction. Whereas in 2008 only just below 28 percent of polled companies were willing to invest, in 2010 with just below 53 percent the number has almost doubled. An energetically optimized building, innovative building services engineering or the use of renewable sources of energy makes for higher energy efficiency. In non-food retail also longer amortization periods of up to five years and more are being accepted.

Commercial enterprises with a total revenue of 165 billion Euros participated in the study “Energy Management in the Retail Trade 2010“. They represent a portion of about 35 percent of the German-speaking area retail trade turnover (the countries this includes are Germany, Austria and Switzerland). 63 percent of those polled come from non-food retail and 37 percent from food retail.

Many small steps in the field

Tengelmann has not built another store like the “Klimamarkt“ (climate market). In leased new developments investors are important, while with existing real estate the remodeling options all too often are limited, says spokesperson Jutta Meister. After all, at a shopping center you could hardly have a photovoltaic roof or use the ground water for heat exchange. Particularly effective for Tengelmann is the replacement of refrigeration units, especially the use of closed chests and refrigerators.

Rewe likewise does not see its “green building“ as a master copy for more marketplaces. They state that depending on the project, individual components will be adopted. But the corporate group views the green building as part of its extensive sustainability strategy. “With sustainable products, we want to provide consumers with new impulses for environmentally-friendly and socially acceptable consumption“, says Alain Caparros, Chief Executive Officer of Rewe Group on April 19 at the corporate group’s first Stakeholder Forum in Berlin. Rewe introduced the new sustainability label “Pro Planet“ for store brands, which ever since – also at the subsidiary companies toom and Penny – is being expanded.

Many other commercial enterprises also work on new projects and initiatives. Hardly anybody believes they can afford to not be a part of green topics. The discerning public will intently look at what’s show and what is true concern. But ultimately it is the consumers themselves that have to start rethinking, because they choose where they shop. They choose what they would like to stay away from. 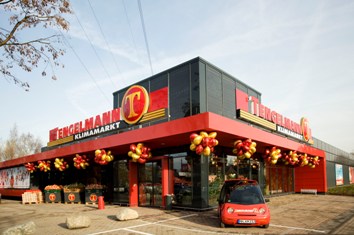