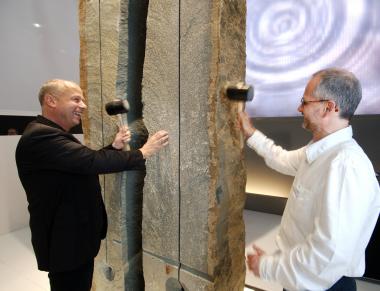 Together with André Füsser, Nico Ueberholz has designed the presentation of his Wuppertal company at the Euroshop 2008 as a striking contribution to basic research in temporary architecture: these two industrial fair designers make a calcium-sandstone monolith weighing six tons and five metres in length and split once lengthways the central feature of a stand conceived as a test bed for communication that sticks in the memory. This presentation of the company entitled "EinKlang" (“Harmony”) creates a discussion environment through the use of an extraordinary stage-setting occupying the field of tension between architecture, light and sound in which the visitor quite spontaneously has to ask himself: “What is that?” and “What are they up to?”

The search for answers leads the visitor into a 6 x 8 metre stand on which the two halves of the split stone face each other as a symbol of the most basic form of communication. Around this construction, which also resembles an over-sized natural tuning fork, four smaller “sound stones” are grouped. They are all not simply hundreds of millions of year old monuments to immortality and a deliberate contrast to the short-lived world of industrial fairs but also become a musical instrument for the visitor: by means of hammering and stroking with tools provided for this purpose, the stones can be made to generate archaic sounds through which one can communicate with each other as if in a game. In this way the Ueberholz team exploit the most ancient form of non-verbal communication: music!!

Music as the elemental language for the expression of feelings

“ In this way our stand invites visitors to communicate with each across all boundaries imposed by language and culture” is how Ueberholz and Füsser explain the basic concept. They see music in this context as a universally understood “elemental language for the expression of feelings”, which existed long before the first articulated words, awakens memories in all human beings and goes straight to the heart not just in the proverbial sense of the term. Particularly when this music is generated in such an archaic manner by sound-stones and is also reproduced visually on a 6 x 6 metre LED wall at the rear of the stand through which the sounds generated are coordinated.

A logistical and technical challenge

This installation cost the Ueberholz team considerable logistical and technical effort. This began already with the search for a suitable stone - and for an answer to the question as to whether a five-foot high monolith can resound at all. The industrial fair designers’ search was rewarded in those Westphalian quarries in which the famous “Anröchte stone” has been mined since the middle ages. This calcium-sandstone, which was created as a result of deposits on the bed of an ancient sea, proved to be ideal for the project in that it could resound – also to the considerable surprise of its owners – and can be easily worked. Less easy was moving the stone to Düsseldorf, which due to the colossal weight of the stone became an extraordinary challenge...

“Insta” and “Scenario” as partners

Ueberholz GmbH used the know-how of its partners “Insta” – a specialist in the field of LED walls – and “Scenario” – experts in developing complex light and sound concepts – in the ambitious realisation of the stand design. They ensured that the stones are equipped with hidden trigger-microphones which directly receive the sound and transmit it to loudspeakers installed in the ceiling. The signals generated thereby also serve to control the LED wall and the LED rods installed in the floor. This is the first time that that an overall atmospheric concept has been created in this way, the full power of which strikes the visitor and is intended to ensure unmistakable impressions.

The path of non-verbal communication by means of the sound-stones leads almost automatically (and that is what it is all about) to verbal communication with the operators of the stand: those taking part in the experience meet each other in “Harmony” in discussion areas unobtrusively integrated into the whole ensemble. Contrasting with this and so as not to disturb the atmospheric effect of the interior of the stand, specific Ueberholz projects are presented on monitors on the outside wall.

The sound of stones and dancing in “Harmony”

In order that this very basic music can exploit its power to the full, Ueberholz also supports visitors to the stand with an “inspirer” in the form of the percussionist Olaf Pyras. Amongst his other projects, the experimental sound artist designed the opening concert to the German “documenta 2007” exhibition of contemporary art and will, together with the visitors to the fair, explore at Euroshop the possibilities offered by sound-stones. But this not new territory for him: Pyras is one of the few people who have met the challenge in creative terms of making music on and with stones. It is then only a small step to his presence at the Ueberholz stand transforming it into a stage: particularly when the dancer Nusara Mai-ngarm from the Pina-Bausch town of Wuppertal makes a spontaneous performance out of compositions for the stones created especially at the fair by Olaf Pyras.

All this effort is not an end in itself, however: “We want the visitors to take home in their minds and in their hearts what they have experienced so vividly” is how Ueberholz and Füsser emphasise the basic concept. The experiment is intended to demonstrate in exemplary form how products and services advertised can be presented in a context which the customer will recall at any time when the individual disciplines making up the architecture of an industrial fair are instinctively brought together. One can therefore truly speak here (see title above) of basic research in the field of temporary architecture. And, as is appropriate for a properly conducted experiment, the “course of the tests conducted” is also recorded in moving pictures. The documentary film-maker Frank Niermann is present at the fair presentation and records visitors’ reactions and the stories and events which take place all around the sound-stones.

“We are creating communication!”

But quite apart from its experimental character, the Ueberholz team also see the idea behind their stand moreover as a design concept for innovative store layout. Because ultimately the same principles apply in the shopping environment as in the industrial fair business. As André Füsser puts it: “Anyone who is able to address the customer’s capacity to establish associations attracts the customer more subtly, but also with greater success”. Ueberholz used this principle already in the Euroshop 2006 as a solution to the task he set himself of "W are creating atmosphere". The result was a stand architecture clustered around a 500-year old olive tree and which received considerable acclaim. Amongst other awards, the Ueberholz team were the first German company to win the “Edge Award” of the American “Exhibitor Magazine” with this presentation of its own work. “EinKlang” (Harmony) takes another vital step forward in 2008. The ambition now is: "We are creating communication!"