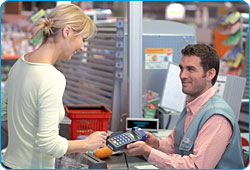 Dusseldorf, February 2008. While the losses suffered as a result of forged bank notes rose in 2007, there was a decline in debit card fraud in Germany: this trend is confirmed by current data of EURO Kartensysteme GmbH (EKS), operating on behalf of the German credit services industry, and the German Federal Bank. This situation is due, in part, to the strategic prevention and intelligence work undertaken by easycash*, the market-leader, as well as other network operators, which (contrary to the tenor of current press reports) were successful in limiting the losses sustained as a result of terminal manipulations.

The figures make it clear: POS terminals are safe

Despite all the critical reports and articles expressing, paying by ec card in retail outlets, service centres and restaurants is one of the safest methods there is. While 104 of the 550,000 POS terminals operated in Germany were reported stolen in 2007 (three of which belonged to easycash GmbH), only ten cases of terminal manipulation were identified nationwide.
easycash itself registered ten instances of suspected manipulation. After the cases were reported to the authorities, the relevant devices were taken out of operation and subjected to detailed analysis by easycash specialists. None of these suspicious cases was confirmed and no losses were sustained by easycash partner companies or their customers.**

“Even the simplest of security measures, such as a regular visual inspection of the terminal, can provide effective protection against the consequences of manipulation”, says Frank Wio, member of the Management Board of the market-leader easycash. “In order to manipulate the terminal the perpetrator has to get into the housing and such damage is usually visible. Opening the device by simple mechanical means renders it inoperable. easycash has provided its partner companies with all the information well in advance. And we, along with the other network operators, have been able to prevent losses occurring.”

Only PIN-based methods of payment were affected. Direct debit payment methods such as the signature-based OLV® (online direct debit) were not. The lion's share of debit card fraud relates to the manipulation of ATMs. EKS registered 1349 cases of so-called “skimming” in 2007.

To enable unauthorised accessing of terminals to be detected as early as possible, the Ratingen payment service company employs a software-based monitoring tool developed by Thales. Continuous process analysis identifies unusual activity which is then classified by means of a special security algorithm. This allows easycash to intervene straight away to block and exchange the terminal before any losses are suffered.

An additional security feature is the holographic security stamp embossed onto Thales’ terminals. This enables users to identify quick and simple attempts to manipulate the device.

Card payment is the safest method of payment

The card terminal is clearly more secure than using cash. In comparison to 52,000 cases of recorded Euro note forgeries in Germany there were 10 instances of terminal manipulation. Whereas the amount lost as a result of forged money increased to 3.8 million Euro in 2007, at 2.5 million Euro the losses due to terminal manipulations was less than the previous year’s figure.
Consumers have the comfort of knowing that, unlike with forged cash, terminal manipulation will not leave card owners to bear the loss where they have taken the normal precautions in using their PIN and card. In such cases, the German credit services industry stands shoulder to shoulder with the consumer bearing the full amount of the loss.

Overall the number of cases of fraud originating abroad has increased. This fact underlines the successful partnership between network operators, EKS, banks, the ZKA (central credit committee), card issuers and public authorities. The security standards in place overseas are often lower that those of the Federal Republic making fraud and manipulation comparatively easier.***

“New technologies“, Mr Wio explains “such as the progressive introduction of the EMV standard mean that cashless payment will become even more secure than it already is.” Alongside PIN authentication this system also examines the authenticity of the card. Today 60% of the some 92 million debit cards issued in Germany are equipped with this chip-based technology. By 2010 the EMV standard (Europay, MasterCard und VISA) will have replaced the magnetic strip card for credit cards within the Single Euro Payments Area, and by 2011 electronic cash transactions will, without exception, be executed using this security standard.

Prevention is the best protection

To prevent losses from happening at the very outset, easycash GmbH operates a special free security hotline. Callers are able to receive comprehensive informative and advice from security experts; specific suspicious cases were not reported by easycash’s partners in 2007.